It has been a while, but here I am again. This season I have been diving, but not blogging. However today I write again. Reason: I started a Wreckdive training and my first dive with the MV Serenity was great. 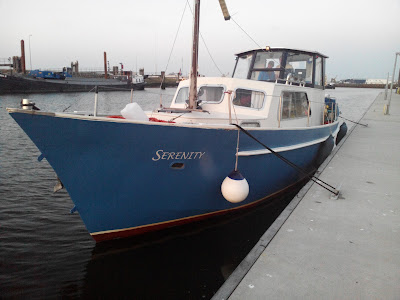 The plan was to go to the Stoomketel site, and check out the wreck there. From there to move to the SMS Bayern or one of the other wrecks. We missed our opportunity to dive on the Stoomketel site, but at least we had more than enough time to prepare for our next dive. The dive team was just 4 persons in size including the skipper (Bas), Ernie and Klaas, the experienced Northsea wreckdiver.

The weekend started on friday evening, for me, by packing and boarding the Serenity in Lauwersoog. It was already in the outer harbour, ready to leave. We went to the anchorspot for the night. Saving us both harbour costs and 2 hours of sailing in the morning. Ernie and I discussed the timing and the options for the dives. and we had a nice evening on the Wadden.

This time I had my normal dive kit with some added features. It was my first dive with my new computer that now replaced my console. My normal divelamp had broken down when I tried it the day before, so I dove with backups. The sea was quite warm and it would be doable to use wetsuits, but I had my trusted drysuit with me. Then, off course the rest dove with simple thin protective gloves... I used my 5 mm. (I need to rethink some things... next dive I take just the protective gloves). The next thing was the SMB and a finger reel and finally for the training itself and as common practice: the big reel. 200m of 3mm cord that I was going to use. I dove with a big 15 liter Steel tank filled to 195 Bar with Nitrox 33. That should be enough for 1 hour at the depth we were going.

Our SMS Bayern was an old Vorpostenboot, the German version of converted fishing trawlers, by adding some weapons on them. This particular one was a ship built in 1930 by Frerichswerft that ran on a mine in 1940. It still is quite intact and complete for a Northsea wreck in this area.

Video from Ernie 2 weeks earlier on the same wreck:


Diving on the Bayern

Timing on going in was not difficult. We saw the current reduced to just a km/h and saw everything calming down. Then we geared up, went in and followed the line down to the wreck. I attached my reel line to the anchor point, a suitable place, only, not so handy when I returned to it later. [learning]

Moving along the wreck, we went to the front first. Criss-crossing the wreck for the best reeling experience. Visibility was quite good, with about 2-5 meters, but conditions can change quite rapidly on these wrecks. On this wreck there were lots of fish in schools we also noticed a large number of Northsea crabs, lobster and a codd. The first un-reeling was done, now it was time to reel in, again.. no trouble there, I had tention on the line when unreeling, this made for easy reeling, no finning needed, just slowly taking in line.

Upon returning at the anchor line after about 15 minutes we went towards the stern, laying out a new guideline. This time Bas, My buddy was in front of me, guiding me through (inside) the wreck. Now I needed to be careful not to trap myself in the line and to keep the dust levels low. A bit of a challenge, but great fun. We unreeled all the way to the stern and found a lot of recent netting there. This was our deepest point, 16.8 meters. Then we returned. Following the line, I tried to reenter the wreck where we exited, but found it was quite narrow so we went over the wreck instead, handing the reel around the trusses beneath us. [learning] Then, when getting back at the anchorline I noticed my guideline was underneath the line which moored the boat. The tricky part was to get the line loosened each the moment the cable slacked. This could cost a finger, or so, if not done properly. [learning] Next time I will most certainly try to find a different spot for fixing my guideline.

As we went up I noticed I had some alarms on my computer.. as we discovered, one was for my airsupply going below the 50 Bar threshold. The other one was for starting the savetystop. Dangling on the line at 6 meters we waited for a bit and then went up. Exiting was easy, the boat was a bit wobbly on the water though. The wind had started to pick up and was was diagonally on the current... which meant the small MV Serenity was catching every wave broadsided.

The dive was great. Even with just one dive, the weekend was quite an experience too. We returned to Lauwersoog Harbour, on the way back we had a great dinner, prepared by Ernie. All in all a great weekend. Thanks all!
Posted by Unknown at 13:34 No comments:


Freshwater from Mrmorc66 on Vimeo.

a Short Impression on Freshwater Dives in Holland
Posted by Unknown at 19:29 No comments:

I had a great time in Egypt.. I'll post the photos in my other blog; dive.mauricedeboer.nl but I returned in one piece.

The journey itself is GPS logged. I do not have all locations marked but at least it give you an idea of the journey.

Unfortunately Google decided to close the KML importing on a map, like I was using for this post. So, now you have to believe me on my word that the trip was worth doing...
Check the dive.mauricedeboer.nl divesite for more.
Posted by Unknown at 16:45 No comments:

Ever since I started looking for a decent and payable divelight I have been on the lookout for new versions, alternatives and DIY solutions. With the current Chinese lights flushing our underwater-lamp market, the producers now seem to be distinguishing themselves more on product and build quality than on brand name alone.

Where 5 years ago you could buy hyped ( and often bad) LED lamps from top brands, you can now see the top brands move away from the "cheap" market and moving more into their respective niche markets. Some of the well established brands have tried to compete with the flood of cheap lights, but I noticed most are leaving that market area for the Chinese now, unable to give them any competition.

Off course this is not only good or bad... at least it creates focus for the industry itself. It gives us, the consumer, a great alternative to be diving with decent lighting that does not straight away cut into your budget so bad that you cannot afford a decent stabjacket anymore.

The innovations in our divelight industry are currently mostly on LED color and composition, not focussing on ever-more Lumen into the same package. This is great as I often found out that when diving in murky water 600 Lumen is more than enough... and any more would only blind you because of all the backscatter you have.

The low-budget end of the market, however, still focusses on 1200, 1600, 2000, 2200, 3000 Lumen and with that has to cope with increasing raw material and productioncosts, more technical development costs and higher energy consumption / shorter lifespan.

Recently I have updated my Chinese light (MJ850) with 2 new Lithium-ion batteries. Battery indicator is not working, now... not recommended by the producer, but at least I can now use my light again for 5-8 dives before I need to recharge.

So would I still advise you to buy Chinese, now? -SURE-

Be aware that buying cheaper lights will cost you things like:


but once you see the pricetags .. it becomes clear that money spent on a Chinese lamp might only cover 2-3 seasons... for starting divers and non-professionals it might be a good investment as the costs often are 1/3rd of comparable lights from the professional branded lights.

So what would you be able to buy on low budget, these days?

My old lamp, the 850 is still in production. 1200 Lumen for 90USD on small orders I would still recommend this one. 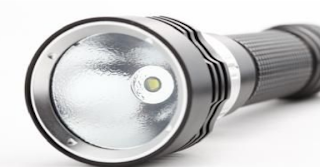 The successor for that lamp might be the AT-876, which also has the SST50 and 1200 Lumen but new batteries and electronics. Yours for 120USD.

For the person that wants to boil water and permanently blind anything or anyone, there is the 2200 lumen version based on a SST-90. You will, however, officially make an end to the term Night-dive, when using this light. (160USD) 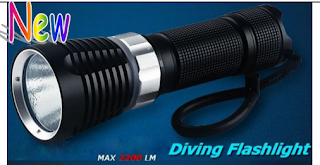 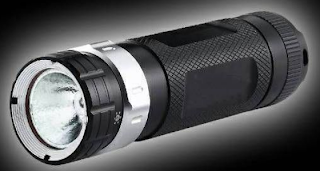 If you are interested in any of these lights .. you would be able to find resellers anywhere on the web. Prices stated above are only indicative and might vary. If you found a good reseller, let me know. I'll buy one or two new lights as well. It saves me the hassle of importing them (mind the P&P and import tax issues) and doing price negotiations. I would off-course be more than happy to setup an order of 20 lights with my Chinese friends... just mail me.

After a couple of years of intensive use the divelight is getting much worse... the batterylife I had at the beginning was about 6 - 7 dives without recharge when using it on setting 1 or 2 during the dives.

Now I have replaced the old accu's by new Li-Ion versions. Rechargable, faster to load, constantly delivering maximum power... and just 1 drawback: because of the accutype the batterylevelindicator does not work.

Left: the new accu's. right: the old ones.

Notice the great work they did at http://www.accudokter.nl/ on adding the little welded knobs on top. The light is now working like a charme, again. I will be using it during our next Zeelandweekend to really put it to the test again.
Posted by Unknown at 14:57 No comments:

Back in Holland - Great holiday in Egypt.

I returned from my dive holiday yesterday... It was a great 11 days of diving, sun, good food and rest. I have to thank a number of people, for their great company, service, fun and support.

The holiday went as planned, there where no real changes from the plan.
First a couple of days at Wadi Lahami and then a week onboard of the Rosetta.

I have done a great number of things seen a lot of new things and had a great experience. I will post on most of it... but it will take me some time to do so.

In my preparation for my dive holiday I found a great little app that I really needed to install. This is the Dive Log app from Rob Knapen. I hope it works out and that I can actually log my dives during the holiday.

The application looks simple, and is functional in the free version, but I actually bought this app as I wanted the full functionality. That actually was a milestone for me: this is the first app I bought! (and I have been using android for 3-4 years or so)

I'll report back on how the app performed during my holiday. I will not have roaming access nor wireless access points, completely offshore.

-9- days left before traveling to Egypt.